Even decades after independence, India is replete with inequality so much so that it is often said there are the two countries, one that is Bharat and the other, India. It speaks of the two different realities that prevail in rural and urban parts of the country. But, it is essential that the residents of both rural and urban areas live in harmony with each other.

According to the National Survey Organization, the average monthly per capita expenditure in a rural area of ​​the country was Rs 1054, while in urban areas it was Rs 1984 in 2009-10, that means the per capita expenditure of urban dwellers was more than 88% as compared to those living in the villages. This is not the only difference in the lives of villagers and city dwellers.

India is said to be a land of villages. Sixty-seven percent of the country’s population still lives in villages. To people who live in villages, life in urban areas is full of difficulties. What they do not like is vehicular pollution, crowd, constant noise, and smoke rampant in cities, which make them feel uneasy.

But those raised in cities love the hectic pace of life. They love to chase their dreams of money, power and social status. Each day brings to them new problems and complications for which they struggle to adjust to survive the rat-race of life.

Definitely, there is a great difference in the lifestyle of people living in villages and cities. The need is to balance both kinds of lifestyles by incorporating good aspects from each other. 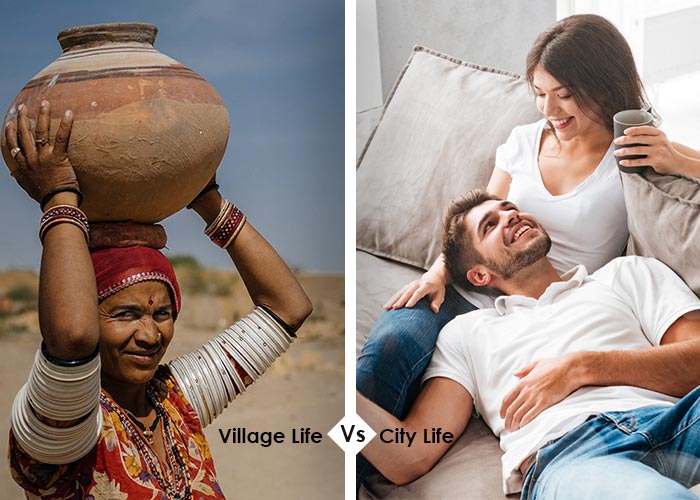 Facilities and opportunities to move forward are greater in urban life than what we find in rural existence but there is an acute problem of pollution, noise, lack of adequate water supply, traffic jam, overcrowding and crime in cities. Similarly, though there is a lack of modern facilities in rural areas, but the clean air and peace are beneficial for the health of the people living there.

Villages hold a mirror to Indian culture and heritage. India’s centuries-long traditions still exist there. You can enjoy sunshine, greenery and tranquillity, and the people here are found to be very warm and friendly.

On the other hand, urban life is filled with tough challenges. Mostly, the people living in cities can avail latest amenities and cutting-edge facilities. They are always pre-occupied and busy with one thing or the other all the time. Sadly, they do not have time to even meet their neighbours, friends and relatives. Thus, there are advantages as well as drawbacks to live in both rural and urban areas.

India is largely an agriculture-based country. Farmers are the backbone of rural economy.  They work very hard in agricultural fields where they grow grains and vegetables. They conserve water in ponds and canals to irrigate crops. The life of farmers is close to nature, away from the hustle and bustle of cities. There is peace and tranquillity everywhere, except for conflicts over land and caste prejudices and the prevailing taboos and superstitions.

On the other hand, people in cities are always racing against time. There is always great pressure to perform leading to stress and other health problems related to the hectic lifestyle of urban life. The urban dwellers have little time for friends, neighbours, relatives, or even their own family members. As the cost of living in cities is constantly going up, the chase of money becomes an inevitable part of life in cities. Yet despite accumulating wealth, peace still eludes the urban habitants.

But life in villages has its own problems. There are frequent clashes related to ownership of land and caste. Many villages do not even have basic facilities of education, employment, healthcare, transport and electricity. Ultimately, there is need for restoring true balance and purpose in your life, whether you are living in a village or a city.

Rural life is quite peaceful as people here do not lead a hectic lifestyle. They wake up early in the morning and fall asleep timely at night. Here the air is not polluted, as is the case with cities. There is also less pollution and crowd. Villagers are accustomed to easy-going life in villages as opposed to the hectic life in cities that leads to great amount of stress for them.

But villages mostly lack basic facilities such as electricity, schools, nursing homes and factories to employ people. Villagers have to walk on foot for several miles, if they do not have their own transport. Villages only provide seasonal employment and mostly people there are not gainfully employed. All these factors lead to large-scale migration of people from rural to urban areas in search of good education, employment and comforts of life.

But life in cities has its own negative side – it’s full of pressure, stress and anxiety. People here have several material comforts and amenities but no mental peace. They are always busy in executing various tasks related to their personal and professional life so much so that they sometimes they do not even know their next-door neighbour. The pressure to constantly perform takes a heavy toll on their health and they become prone to various ailments or lifestyle diseases even at a young age. Some of them even spend sleepless nights and their mental equilibrium takes a beating. So, life in rural and urban areas is poles apart but both are integral to the development of India.

More than half of India’s population lives in villages. Gandhi had said “the real India lives in villages”. Rustic simplicity and natural beauty is emblematic of Indian culture and heritage.

Lives of most of the people in villages mostly depend on agriculture. Some people earn their living from animal husbandry and agro-based cottage industries. Most of the villagers are farmers. They are hardworking, unassuming and generous. When farmers plough their fields in the morning sun, the chirping of birds that accompanies the movement of the oxen seems to hum a melody of hard work. Farmers are innocent by nature unlike some of their urban counterparts who lose their inner goodness in the cut-throat world of materialism in cities.

Life in urban India is marked by wide-ranging disparity. There are residents who have unlimited means of enjoyment but some people are so poor that they have to live in slums. Economic inequality, pollution and garbage are the bane of urban existence. People also have to face lack of adequate water supply. Yet people want to live in cities because they get facilities for good education, healthcare, transport and so many modes of comforts and entertainment. There are also good opportunities for employment in cities unlike villages where very few people are gainfully employed.

City life is a boon in many ways, but on the other hand it is also a curse. Every year the population of cities is growing by leaps and bounds, increasing pressure on their infrastructure and reducing life to a dehumanized rat race.

Thus, life in villages and in cities presents two contrasting pictures. There are positive as well as negative aspects to the both and it is up to the individuals to make the most of it irrespective of the rural or urban setting that one lives in.

Life in both rural and urban areas has its own plus points and problems. One is quite different from each other. Traditionally, India is a predominantly rural country as Mahatma Gandhi had said, “The real India lives in villages”.

There is a splash of festivals and fairs in villages. Here festivals are celebrated with a sense of brotherhood in a traditional way. The whole village dances to folk tunes at the time of festival whether it is Holi, Baisakhi, Pongal, Onam, Dussehra, Diwali, or Eid. All the people in the village live in bonds of fraternity. They share mutual happiness as well as sorrow with each other as per the circumstances of life. Though their lifestyle is not as advanced as what you see in the cities, rural people are warmer, and more cordial. They are more considerate and know each other in the village. They do not live in a state of isolation as is the case with metropolitan cities.

The natural beauty of the villages in India is simply eye-catching. The lush green fields capped around by flowers and spread an intoxicating fragrance. Birds chirp around merrily in fields, barns and village homes. Simplicity is the hallmark of life in villages.

Unfortunately, the search for jobs and the glare of material comforts and facilities is leading to large-scale migration of people from rural to urban areas. Though, now villages in the country are now also advancing in terms of standard of living. Urbanisation is taking place at a fast pace; electricity, piped water, concrete roads, telephone/mobile phone, computers, education and medical care are accessible facilities in many parts of rural India these days. Farmers are now using modern agricultural implements, and in place of oxen, they are ploughing the fields with tractors.

But life is not without troubles in villages too. There are frequent disputes over land and same-gotra love marriages, which all result in bloodshed and violence. The village panchayats when deliberating on disputes pronounce very harsh and uncalled-for judgements which make people’s life a tale of misery and pain.

Villagers depend on the sale of their agricultural produce on urban markets and city dwellers cannot survive without the supply of essential commodities such as grain, fruits and vegetables from rural regions. People from villages daily commute to cities to buy latest articles of modern life, watch movies, relax and enjoy themselves or do jobs in urban establishment. In fact, development of India is unthinkable without the harmonious development of villages and cities. Both of them complement each other.